*this will be a bit of inappropriate post since Franky is a bit of an Ecchi, discretion is advised*

Beach and Seaside always remind me of Franky from the anime One piece, since when they found him he is a part of a big beach party community. That is why he is always wearing a small speedo and Hawaiian shirts. That was my inspiration this week :) 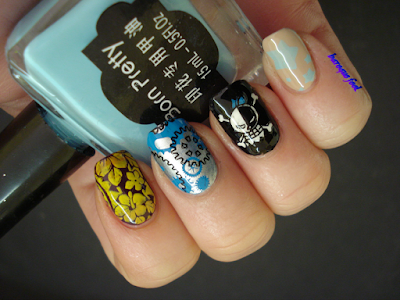 Here you can see him striking his signature pose. Thou by now he looks way different in the show, and by different I mean way worse so I decided not to show it. I also used his blue tattoos and his personal Jolly roger as inspiration. 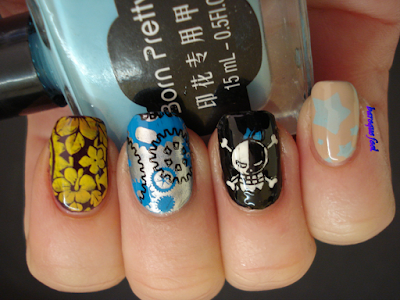 I also created a nail featuring gears since he is a cyborg and the Straw hat pirates in house handy man. Here you can see him shooting laser beams from his nipples - because why not :) 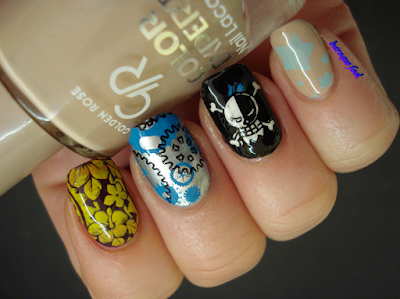 A big part of his Origins story was him running around his home town naked - I find it adorable :)

For this manicure I used Kiko 295, Golden rose 101, Catrice Occult and Wet N Wild Darkest hour as base polishes. The stamps are made with hehe 016, hehe 011, BM20 and MoYou London Tropical 18 plates. The stamping polishes are Essence stamp me!black and white, BPS 6 and 10, Mundo de Unas Yellow and Star gazer 232. 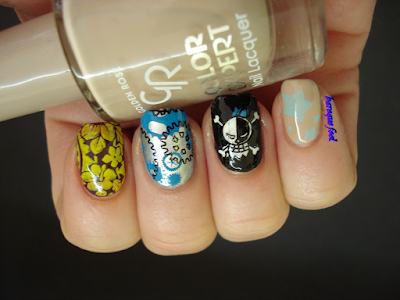 I hope you weren't to insulted by this post, but I can't help if I get inspired by the weirdos out there :)