I had no idea what to do for Mexican and I just come out of a gaming marathon with my BF where we played Deadpool video game for days :) And one of his crazy gimmicks where to collect tacos. So he was the 1st thing that popped into my head when I saw the Mexican challenge :)

And who is Deadpool you ask? Well think of Wolverine's abilities with swords, and hammers and bombs and a mental issue. A big part of the game he is fighting with the voices in his head :) And instead the way normal games strive for epickness here he makes fun of everything - FFS the game starts with him scratching his nether regions with a gun :)

Also to make him more 'mexican' his GF is Death that looks like a hot babe with dios de los muertos make up :) 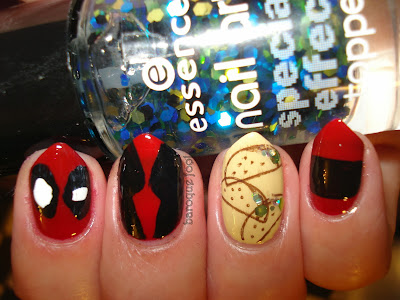 So here is his masked face, some outfit nails and a taco nail :) I love how his eyes turned so crazy looking :) For the look I used Essence do you speak love as red base and free hand drawn stuff with Essence stamp me black and white. The taco finger is done with China glaze Kalahari kiss as base. The stamps are made with Essence in Love and Cheeky plate Viva Mexico. Then I fished out some green glitters for the lettuce from Essence Mrs. & Mr. Glitter :) 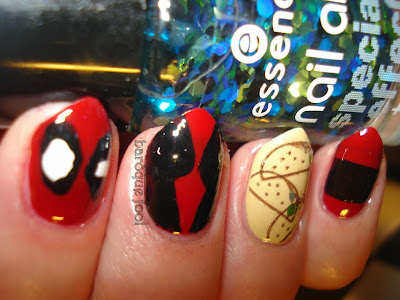 This is him and his Death GF and yes they kiss and yeah he never takes that mask off . . . Fun stuff :) 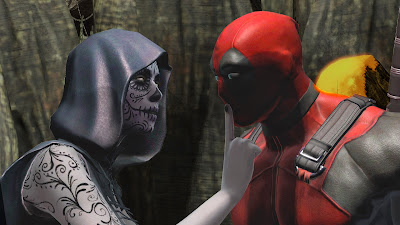 And here is a trailer for his video game made in the typical chaotic Deadpool fashion and yeah that is how the game looks like :)