As some of you know I am not a flower fan - I know it's a popular theme in such a girlie community but I am going my own way :)

This mani is inspired by a League of Legends (video game) champion Maokai the Twisted treant. He is a living tree - think the tree creatures in LOTR only more vicious. He constantly carries a little sapling (pinkie) with him and uses him as a bomb or eats him and such - and the little guy is so cute I feel sorry for him. So I usually don't play couz I can't listen to those sad squawks it makes :) After checking out his picture below you will understand the inspiration for the mani :) 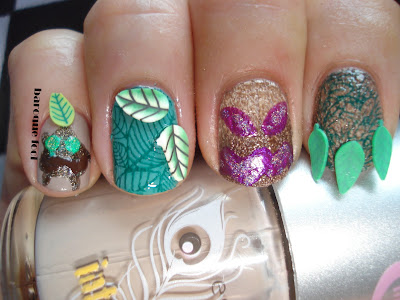 On my index and middle finger I tired to make the tree bark effect with OPI Solitaire as base and Essence In love over it. The ring finger has Catrice Jade is not my name as base. The green stamps are made with S-he 314 and BM11 and BM19. His face is made with S-he 235 and Depend 2035. The pinkie finger with the sapling is done with Essence Zulu as base. His body is made with OPI What wizardry is this, the face is made with Essence In love, China glaze In the lime light and Depend 2031. I tried to use the holos to make it shine like on the picture but I failed miserably. But I do love all the fimo slices I added - it makes it all seem like the leafs that are around him in the game. 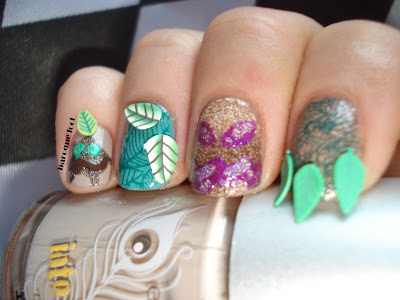 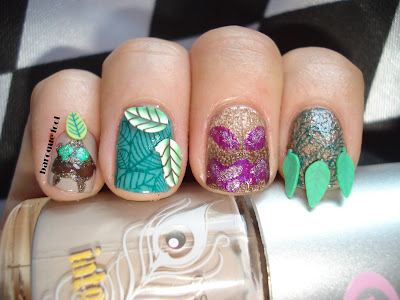