Well no one said I can't use computer games. I must say I have played more hours of video games then real games. And for this part of the challenge is choose something so iconic any video game has this. It's LoLs champion Garen the might of Demacia - he's a paladin type of character. The one who can tank, heal and kill everything on his own, is handsome and super easy to play *looks at Blood elf paladins from WoW* Not realy personally a fan of him in game but hes an Icon and deserves a pretty mani :)

For the inner two fingers I used S-he no.291 as base the outer two fingers are Essence LE Jacobs protection. For the crackle effect I used China Glaze Tarnished gold. To make the Demacia emblem on the index finger I used a glittery blue jelly from Depend no. 252. The look is a bit like Jarvan (type it in the search engine on the right) it's supposed to be the gold of the pretty armor and the blue of the uniform under it. I loved it so much :) 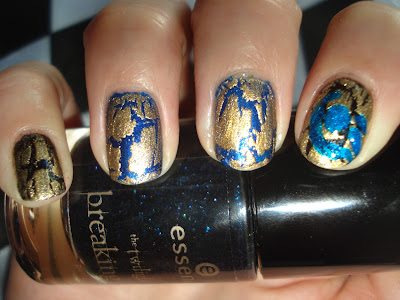 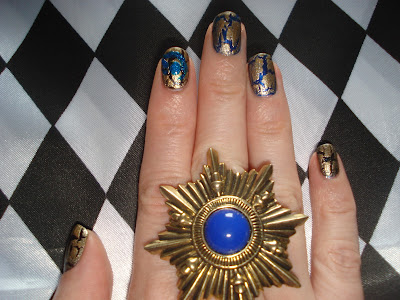