Yesterday I was lucky enough to find a fully stocked Catrice LE Siberian call. I took The calm call and by the time I got home I was sure it was a Essence LE Edward's love DUPE :(
I rearely do comparison posts but for this I had to.

Edward's love is a black jelly with silver flakes and rare holo micoglitter. But when I was cleaning my cuticles I realised it's more of a silver flakes base with black added into it. The black in this on is less opaque then in Siberian call, but it gets it's opacity in the flakies. So 2 coats are enough.

The Calm call has a more dark and opaque black base and the flakies are more scarce. From time to time they get a green and purple sheen - but mostly they are just silver. I used just 2 coats - and you would think after that the effect would be the same as in Edwards love but it's not. The micro flakies are still more rare.

I must say they are very similar but still quite different when it comes to colour base, number of flakies and the shimmer emitted from the glitters inside. Both I think a great choice for a lovely New Years  mani :)

Let the pictures do the talking :) 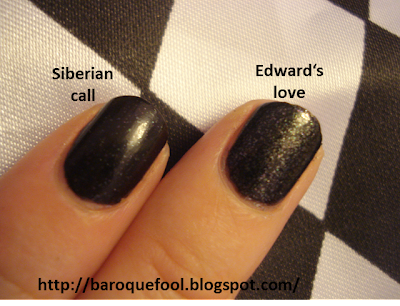 Do you ever get dupes by mistake?